GMD Linguistics provides a broad range of professional translation services for Portland. From the most common European and Asian languages to the rarest African and Native American dialects, we have a proven track record of delivering the highest quality translations to fit your schedule.

Even though less than 22% of the population of Portland speak Spanish, getting high-quality Spanish translations here is still important. Our Spanish language translations are always personalized for each client’s unique requirements, so you can count on us to help you connect with Hispanic markets locally and around the world.

About the City of Portland

Portland is the largest and most populous city in the U.S. state of Oregon and the seat of Multnomah County. It is a major port in the Willamette Valley region of the Pacific Northwest, at the confluence of the Willamette and Columbia rivers in Northwestern Oregon. As of 2019, Portland had an estimated population of 654,741, making it the 26th most populated city in the United States, the sixth-most populous on the West Coast, and the second-most populous in the Pacific Northwest after Seattle. Approximately 2.4 million people live in the Portland metropolitan statistical area (MSA), making it the 25th most populous in the United States. Its combined statistical area (CSA) ranks 19th-largest with a population of around 3.2 million. Approximately 47% of Oregon’s population resides within the Portland metropolitan area.

Named after Portland, Maine, the Oregon settlement began to be populated in the 1830s near the end of the Oregon Trail. Its water access provided convenient transportation of goods, and the timber industry was a major force in the city’s early economy. At the turn of the 20th century, the city had a reputation as one of the most dangerous port cities in the world, a hub for organized crime and racketeering. After the city’s economy experienced an industrial boom during World War II, its hard-edged reputation began to dissipate. Beginning in the 1960s, Portland became noted for its growing progressive political values, earning it a reputation as a bastion of counterculture. 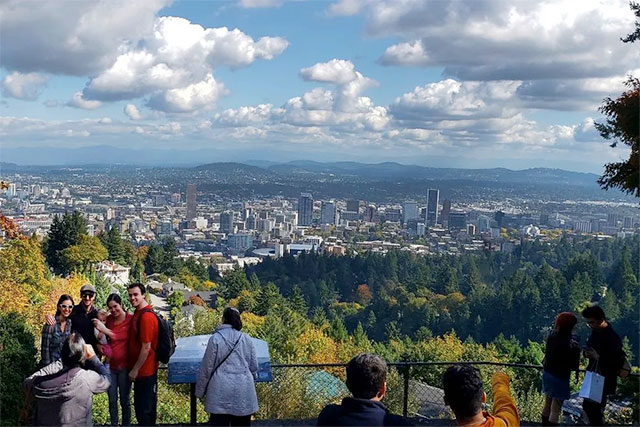